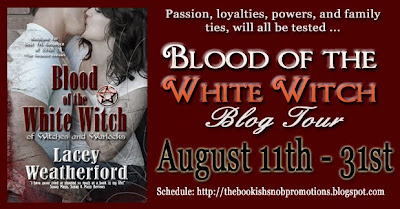 Welcome to the Blood of the White Witch blog tour!! I'm excited to have the fabulous Lacey Weatherford here with an excerpt from her book Blood of the White Witch. By the way, this is the 3rd book in the Of Witches and Warlocks series. It's a YA paranormal romance series that I totally recommend! You can read my review of this particular book HERE.

“Come on, baby. Just one little kiss on the cheek for me then,” he begged, and he tapped his index finger on his face, his eyes sparkling.
I couldn’t resist him. His power of persuasion over me would be my complete undoing. He knew I would do whatever he asked, following him to the ends of the earth and beyond.
I leaned in to lightly to place a peck against him, but before my lips landed, he turned his head and kissed me full on the mouth, wrapping his fingers around my chin and holding me there.
Sighing, I made up my mind right then and there that if kissing were a sport, Vance would win in every category every time. He could turn my insides to complete mush with even the slightest touch.
He pulled away from me with a chuckle, his face mere millimeters from mine.
“See, that wasn’t so bad now, was it?” he asked with a dimpled grin, his eyes searching mine.
“Go take a shower,” I said, smiling, refusing to give in to his charmingly manly display.
“I want to show you something first,” he said straightening, and that was when I noticed he had something draped over his arm. He lifted it, revealing a red and green plaid kilt. “What do you think?” he asked with a grin, lifting an eyebrow.
“A kilt?” I asked with a slight snicker at the idea of Vance wearing such an article of clothing, completely unable to wrap my mind around the thought. “Where did you get it?”
“Douglas gave it to me. This is the Cummingses’ tartan, I guess. He said I was part of the family, and I should have one.”
I knew this was a huge thing for him, to actually be treated like family by his family, and I tried to tone down my humorous reaction.
“Does he want you to wear it to the reception?” I asked, not really sure if I would care for that or not.
He shrugged. “He said I could if I wanted to, but it was up to me since I already bought the other suit.”
“So what’re you going to do?”
“I don’t know.” He chuckled. “I told him I’d think about it. Honestly though, I don’t know if it’s my cup of tea. I have a hard time even wearing the tuxedo.”
“Well, it was a very nice gesture for him to make.”
“I agree,” he replied, leaning down to kiss my cheek.
“I’m going to get in the shower now,” he added.
My eyes followed him as he left before turning to look back at the fire while I contemplated recent events.
I was very happy Vance seemed to be finding his niche with his family and that they seemed to be genuinely receiving him with open arms. Family was something he’d always wanted a connection with.
The fire danced in the grate before me, and I soon became caught up in my thoughts, so much so I didn’t hear him approach until he spoke.
“So what do you think?” he asked and I looked up to see him standing just outside the doorway.
My mouth went slack, and I thought my teeth might fall out onto the floor.
He was standing there dressed only in the kilt with the length of plaid thrown up over his shoulder. His wet towel dried hair stood up messily off his head, and I could smell the scent of his aftershave wafting through the air toward me. He looked down to make an adjustment on the belt at his waist, and all the muscles in his body rippled in response.
My gaze traveled from his head to his toes, and I was afraid to blink for fear this luscious apparition would disappear. He looked like an ancient highlander straight out of a romance novel.
“Well?” he asked me again, when he was done with the adjustment.
I got out of the chair and walked boldly toward him, grabbing his face in both of my hands and kissing him with every ounce of my being.
I caught him off guard, but he chuckled against my lips before his arms came tightly around me and he really kissed me back. Threading one hand through his hair, I let the other drift down his muscled shoulder and over his bulging bicep, squeezing it slightly as I passed.
This evoked a low growl from him, and he moved forward aggressively several steps until I was pressed up against the wall.
He ravaged my mouth until I felt faint from lack of air before he broke the kiss, staring at me as we both gasped for breath.
“So I take it you like the kilt?”
“On you, Vance … definitely,” I answered with a nod, breathing heavily, and he pushed into me again, picking right up where he had left off. 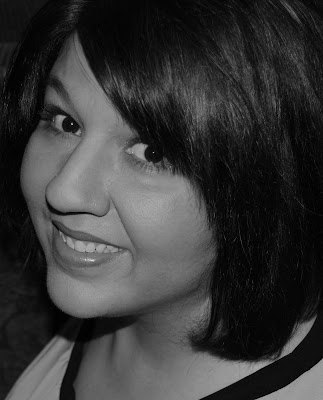 Lacey Weatherford has always had a love of books. She wanted to become a writer
after reading her first Nancy Drew novel at the age of eight.
Lacey resides in the White Mountains of Arizona , where she lives with her wonderful husband, six beautiful children, one son-in-law, and their energetic schnauzer, Sophie. When she's not out supporting one of her kids at their sporting/music events, she spends her time writing, reading, blogging, and reviewing books.

You can contact Lacey by following her on her social medias:
Twitter at http://twitter.com/LMWeatherford
Facebook Fan Page at Of Witches and Warlocks- Paranormal Book Series http://www.laceyweatherfordbooks.com
http://www.ofwitchesandwarlocks.com. 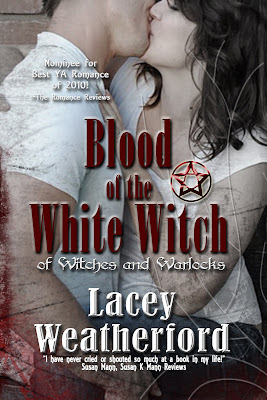 When love came knocking on the door of novice witch, Portia Mullins, in the form of handsome bad boy, Vance Mangum, she had no idea how quickly the attraction between them would escalate. Now she finds her relationship with Vance taken to a whole new level, in a way she had never dreamed possible at this point and time of her life. Yet even as the personal connection between them explodes, the two quickly find themselves in a world of shifting balances. While searching for Vance’s missing mother, they realize they are suddenly unsure of who to trust, learning that sometimes things are not always as they appear. When Vance’s demon characteristics abruptly begin to resurface again without warning, the horrible truth comes out, crashing down upon them and shattering some of their most precious dreams. Once the deadly plan is uncovered, Portia and Vance find themselves hastily rushing against the hands of time in an attempt to stop an ancient ritual from being performed. But will they be successful before fate reaches out to twist them cruelly, possibly separating them and changing magic forever? Passion, loyalties, powers, and family ties, will all be tested when dangerous adventures abound in this third installment in the Of Witches and Warlocks series, Blood of the White Witch.

You can find this book at the following places:
Amazon (paperback)
Amazon (Kindle)
Barnes & Noble
Smashwords


Be sure to follow this tour for an AWESOME giveaway at the last stop!!! 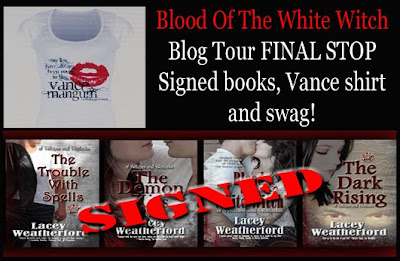 Next stop on this blog tour:
Aug 26 - My Neurotic Book Affair

For a complete tour schedule, visit The Bookish Snob Promotions
Posted by Tishia Mackey at 12:08 AM